West Virginia had the nation's highest drug overdose mortality of 51.5 per 100,000 standard population, compared with the national average of 21.7 in 2018. In the last five years, pain pills flooded the state, with providers writing 69 opioid prescriptions for every 100 persons, compared to the average U.S. rate of 51.4 prescriptions.

The opioid addiction problem had a rippling effect on the community, disrupting families, straining public institutions and increasing the number of children in the foster care system. West Virginia counties with the highest rates of opioid deaths also tended to see higher rates of child abuse and neglect. The Centers for Disease Control and Prevention states that adverse childhood experiences (ACEs) like these, can have lasting, negative effects on children’s health, well-being and opportunity well into adulthood.

Henry J. Kaiser Elementary, in Ravenswood West Virginia was profiled in the Nation Article “These Kids are Watching their Parents Die”. Principal Amber Hardman noted “a marked uptick in intense behavior problems” in these young students –”who are defiant, throw chairs and tip over tables.”

While Henry J. Kaiser had outstanding teachers and various Social Emotional Learning (SEL) programs in place, the staff felt the problems were getting worse. Many children were experiencing chronic stress associated with poverty, family dislocation, addiction, overdose death, and incarceration, that they carry complex emotional needs and lack of concentration with them into the classroom. One educator, Christy Archer said “We feel hopeless. We want to help these children read, but they can’t…..because of things beyond our control.”

In response to the Nation Article, Inner Explorer reached out to Ms. Hardman to see if their daily mindfulness program could help. She said, "We were struggling…..classrooms were taken over by behavior issues. Kids were exposed to so much trauma that they were simply not ready for academics. We desperately needed a solution and tools but we lacked resources. Just as I started to look into trauma sensitive programs, Inner Explorer found us !" Through the generosity and partnership with LG Electronics, Inner Explorer was able to grant Henry J. Kaiser Elementary School the program at no charge.

"I wanted to quit. In my 31 years of teaching, I had never experienced so much disobedience and trauma before in my career. After practicing Inner Explorer with the kids for a year, I saw a transformation in my classroom. Students no longer had outbursts in class, I didn’t have to send any of the kids to detention, and their grades significantly improved. I decided not to quit."
- 2ND GRADE TEACHERS

Henry J. Kaiser staff had utilized the Positive Behavioral Interventions and Supports (PBIS) framework for several years prior to implementing Inner Explorer. They continued by integrating the mindfulness components into the structure. Tier 1 is considered universal instruction. Most students in this group are ”At or Above grade level” academically and have very few behavior issues. Tier 2 includes students who are “Below grade level” and/or have behavior issues that require additional supports. Tier 3 includes students who are “below or significantly below grade level” and/or have significant behavioral issues requiring one on one intervention

Henry J Kaiser’s principal, Amber Hardman took a student-centered approach to implementing mindfulness with all students, in the five focus areas noted below. She allocated time in the school schedule for the 10-minute practices and instructed her staff to use Inner Explorer every day to help students get to a state of educational ‘readiness’. The schoolbased therapist, Stephanie Majetich said, “I even used Inner Explorer in my therapy sessions with students. It creates an atmosphere that’s conducive to learning. I know students are using these skills at home too, because parents have made so many positive comments.” 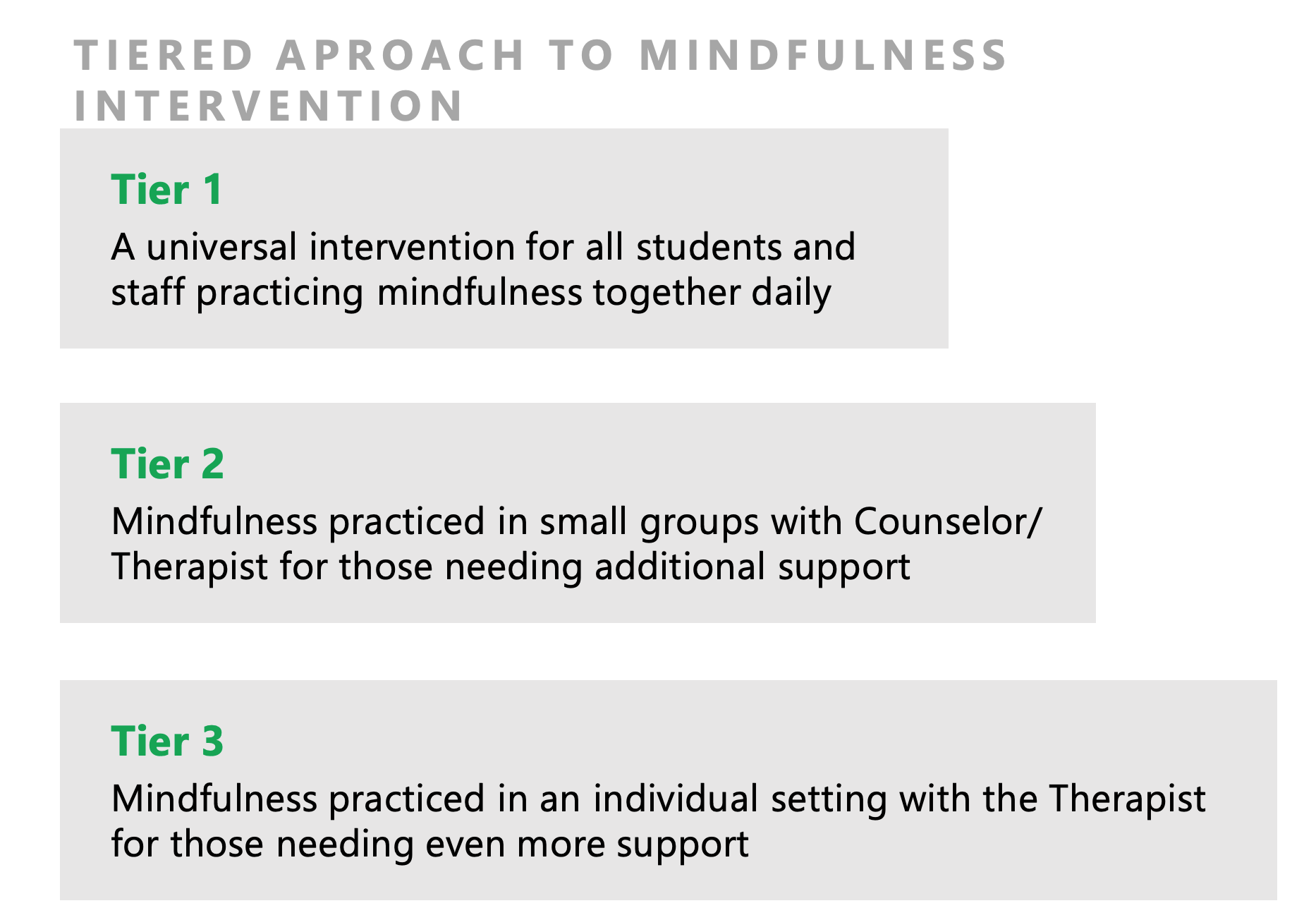 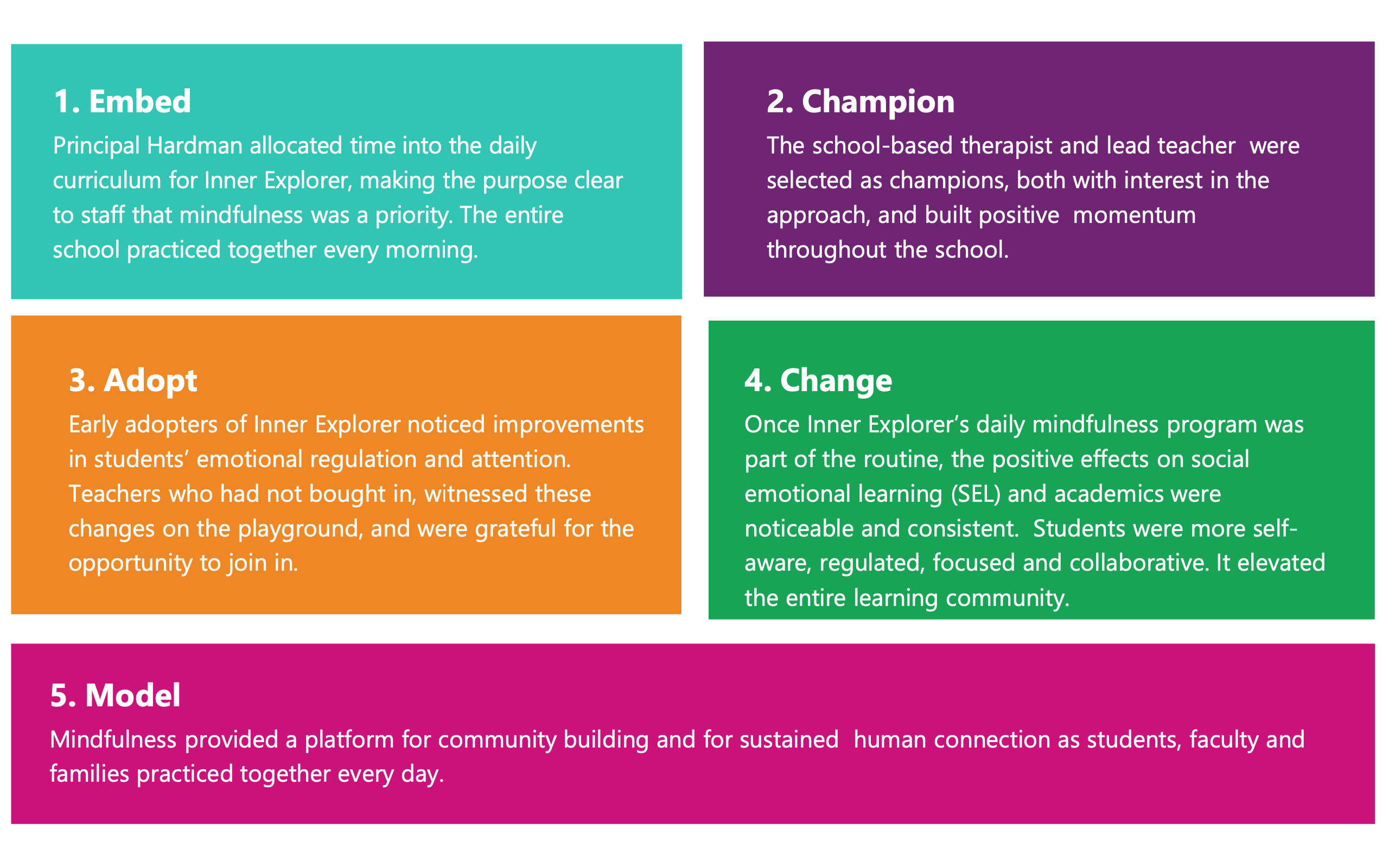 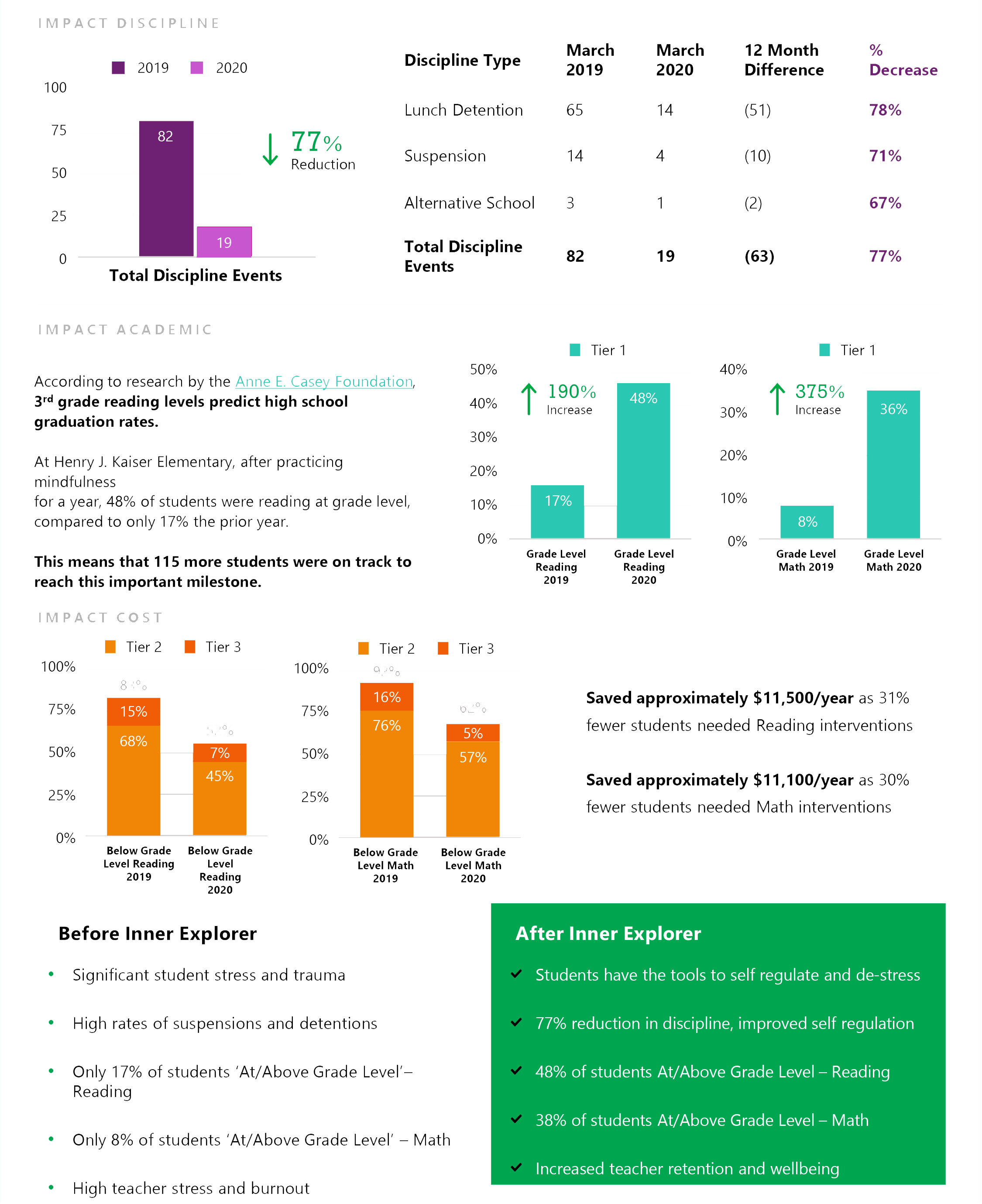